Laura Florand has quickly become one of my favorite authors. I love her stories of Paris, and chocolatiers.

The one person who doesn’t like Paris, however… Is her newest heroine, Summer Corey. The Eiffle Tower mocks her, the city leaves her distraught. Luc, on the other hand, doesn’t know quite what to do when she collapses into his arms and offers to buy him a yacht.

And doesn’t understand the significance of that gift for way too long.

While I love this series, this one was the hardest for me to get into and let go of. It’s almost as if, like on of Luc’s delectable creations, the heroine and hero’s layers were encased. Once that was cracked, it was a great story about being who you are (not whom your parents and/or others want you to be), and learning how compromising with the one you love can lead to a better dream.

I really hope this series continues— there’s still a few chef’s who need to find love in the series 😀  (And I just found one I didn’t know about, so my new Nook will be getting a workout!)

But it has lead me to a question regarding series. Once I got past the first chapter or two, I tore through this book like all of the others. Slow start, but worth it. I’ll pick up her next book in a heart beat, no questions asked. But how do authors keep the series fresh, while still bringing their core readership with them? With Florand, the series is about Paris and, of course, chocolate. Many of the characters are either related, or floating in and out of each other’s lives as rivals / friends. This is the best type of series for romance readers… because we get to pop in on our happily ever after couples 🙂

Hopefully, New Years Eve, I will be posting an update on my writing goals for the year vs. reality (no where near close, but better than I thought) along with my goals for the new year. If I don’t get it done Tuesday, definitely Wednesday. 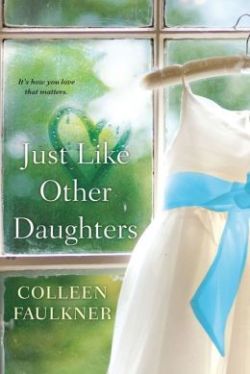 This weeks book, Just Like Other Daughters by Colleen Faulkner, works on so many levels. There’s sorrow and humor and hope threaded through out the novel, just as in real life. At its heart, the book is about a mother’s love for her child. That child happens to have Down’s Syndrome.

The ending of the novel is foreshadowed in the very first line: I lost Chloe twice. Throughout the novel, there are little blips where it switches from first person past to first person present… Those blips are not a slip (and you know me, I’d call ’em out if they were). You need to pay attention to them. As a writer, I find it breath taking how she prepares us, the reader, for what’s going to happen and yet… it still makes you catch your breath on a small sob when it does.

Now, on a more personal note… This book made me look at how tightly I keep my son to me. Granted, he’s only seven years old. However… I started loosening the reigns with him. Because he *can* do it. We went into B&N (you know I love that store), it was just the two of us. He wanted to play at the Lego table. He PROMISED he wouldn’t go anywhere else– not even to the bathroom. And if anyone tried to take him somewhere else, he’d scream.

So I walked away. Like any good mom, I hid behind a book shelf and watched him for a while. He was perfectly fine. I walked away for a few minutes, went back to check and there he was… still happily building at the Lego table. Shopped some more, went back and checked on him. The guy working the Nook desk finally took pity on me and told me “He’s fine. I’m right here, and he’s fine.”

Wow. Am I that much of a helicopter mom? I need to loosen the reigns, I guess, and let him learn to live in the real world instead of the bubble I want to make for him.

The Chocolate Touch by Laura Florand

I loved this book. The newest entry into the series, The Chocolate Touch by Laura Florand, does something that not many romantic novels do: open from the hero’s point of view. And what a hero he is.

Dom is flawed. Really, really flawed. But he has fought his way to where he is, and is so restrained and tender when dealing with Jamie that it almost breaks your heart. Jamie herself was almost broken, before she came to Paris, before Dom.

This one sits with me, still. I finished it last night, and it’s lingering on my palate like a good chocolate should. Just enough to make you crave more.

I think Dom and Jamie’s story is staying with me because of the insecurity. Both of them are riddled with insecurities, real, honest to goodness insecurity. In one of the sweetest parts of the book, Dom goes to see a psychologist so he can learn how to be perfect for Jamie.

He doesn’t realize that the very things he hates about himself is what she loves. Watch, in the book, when they talk about his hands. The scars, their weight and heft and the fact that the cocoa butter has softened them. It’s more than holding hands, it’s more than just sex. (Although that was well done, too!) It’s almost a metaphor, carried out subtly and quietly, and it stays with you.

I’m not going to do the plot in a jot on this one, because I’m pretty sure that you can figure out what the story’s about from the post LOL.

But I will give it 4.5/5 whispering whimsies.

(Special Shout out to both Kensington and the author: THANK YOU FOR NOT MAKING ME WAIT ANOTHER YEAR FOR THE NEXT ONE! I think I saw that it comes out in December.)

I’ve played around with the formatting of the book reviews… Let me know what you think. I’ll probably post one more book review this week, as well as some writing related posts on the weekend.

More Than You Know by Nan Rossiter is a quiet sort of book. It’s not one to come in and take you by storm, and can I say Thank Goodness! There was already a lot of emotion in the book, and drama that was natural to the plot… It didn’t need a lot of grandstanding by the author.

PLOT IN A JOT:

I loved the moments when the sisters were together, remembering their mother, shedding tears. Mia, the mother, was a Godly woman… But after her death her daughters find out that she was definitely not a saint.

I also loved the pacing of the novel. It all takes place in about a week~ but through the natural flashbacks, it covers much more. It’s never rushed.. More Than You Know is more of a stroll than a sprint.

Unfortunately, there were parts that I didn’t particularly care for. Those were the written letter/ journal that the mother left behind for her daughters. While it gave a lot of insight, not only into her life and her loves (and her disease)… I hate epistolary novels. If the letter/journal goes on for more than a paragraph or two at a time, I tend to skim over them. These were done well, but… I don’t know if there was a better way to do it or not. We, the reader, are enriched by the information and the connection to the missing character…

But I just don’t like them. It’s a personal preference thing, Too many bad ones that I had to choke through in college.

When all is said and done… I highly recommend this book. Although the subject matter is heartbreaking, the book itself is not. It’s up-lifiting, oddly enough.Great for a summer beach read. Or even a sitting in the back yard, while your 7 year old plays pirates, muttering “Uh-huh! Go kill Captain Hook, Honey!”

After the Name of the wind, I needed something a lot different. Since I had just received a nice fat padded envelope from Kensington Books full of ARCS, I started digging for ones that had recently been published. I saw this one and decided screw it- I’ll go with the author I love!

It features a mother daughter trip to Florence, Italy. Elizabeth wants it to be a momentous, a bonding experience that will last them a life time. Marina, however, views the trip as an inconvenience. One thing that caught me was that Marina wasn’t present for most of the trip. At first, she’s busy texting and talking with her boyfriend stateside. And then later… well, she’s actually physically not there (in a good way). Thank goodness  they each have their own pov chapters!

So nothing is going Elizabeth’s way… Except it is. She just doesn’t know it yet. This book has layers and layers of the ways mothers and daughters behave towards each other, and how the dynamic can change between grandchild and grandmother when Elizabeth finds out that her mother… Well, hasn’t been very kind to her, but is apparently doting on Marina.

I’m not sure what they’re called, but the snippets (“quotes”) at the beginning of the chapters of what I hope are fake books and a column from “The Answer Lady” are so funny! They also add layers to the chapters, so make sure to read them.

It does share an underpinning with Name of The Wind. Although the references are few, this is a story being told by people who have already lived it. Unlike many first person past tense, where it is all in one time line, there are a few lines throughout the novel that clue the reader in on the fact that it was written after the events. There’s mention of Elizabeth’s notes, and how for one day there’s nothing on them except for what she ate.

My only problem is that while Elizabeth’s story was wrapped up nice and tight, Marina’s wasn’t. But that perhaps is the glory of the character’s journey: at a very young age she is moving from a tightly regulated and planned out timetable for her life to moving towards allowing uncertaintity, passion… Life into her life.

I am currently reading the second book in the Kingkiller Chronicles, so it will be another week before I’m done. The sucker is over 1100 pages! Oh, and I enrolled in an online fiction writing class, F2K, which I’m really enjoying. Plus writing a bit every day…. But I promise, my lovelies, I’m going to get better at this! I am working hard on it!