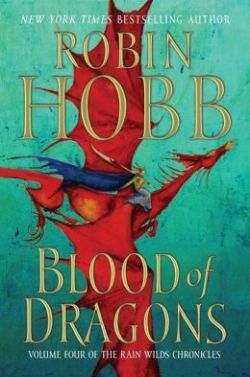 Originally, this was intended as a trilogy, but it is actually four books. That works for me. Blood of the Dragons is actually the last book in the series, and it wraps it up nicely.

Books One (Dragon Keeper) and Two (Dragon Haven) hooked me in and would not let me go. Book Three (Dragon City) is a bridge book— one of those books in a series that kind of breaks with the first ones, so that the grand finale will make sense. We also get 3 new point of view characters. We had seen or  heard of them before, but had never been inside their heads.

Most authors, you know that everything will work out ok… but with Hobb on this one, I wasn’t sure (but in a good way). I tore through the whole series in about a week, maybe two (I know I had to wait for payday to get the last one LOL).

Love, love love this series. Especially love how the dragons are very distinct from humans, and from eachother. They are not merely beats, but neither do they think or act in a human way. Why would they? They outlive humans by hundreds, if not thousands of years.

I was sad to read the last pages of this series, but rest easy knowing I can visit anytime I want to. While the instinct of a fan girl such as I is to keep writing the series, as writers we all know when the story is done.

Hobb also has a habit of re-visiting the world she built in completely different ways… and re-introducing her characters. Check out Paragon, and how far he’s come by the time this novel opens. So, onward and upwards!

I was so geeky over the series, that of course I have to give it a 5/5… with the caveat that book 3 is a bridge book.