Some things happened the weekend of March 20th that inspired me. Some people inspired me. The first was Jennifer Pastiloff. If you dont follow her on Facebook or Instagram, you should. In the face of losing her livlihood, she decided to hang on by asking “How may I serve?” She did one of her classes online for a donation… to help feed others. To buy diapers, food. To help. She could have set it up and done her confrences that way– Zoomed her way into a paycheck. I still think she should consider it. But at this time, when we needed help, we needed to remember that you can always find 5 beautiful things right here and now… she gave me that reminder. That hope.

The other person that inspired me was Jon Bon Jovi. He did a video of the start of the song and asked that the people watching help write the rest. I don’t remember the name of the song, but i do remember thinking that he has already made an anthem for these crazy days. Because We Can. And also Army of One.

Those who know me know that Bon Jovi wrote the soundtrack to my life. At one point I toyed with writing a monologe set to their music. Is it any wonder that when I was looking for inspiration and comfort and the “Hell yes we can do this!” I turned to them, to the band that I grew up beside?

How many have seen the meme about writing cards to seniors in rehab care facilities? On Monday night i got a wild hair and called the one Dad had been in here locally.  They have 82 people there. Writing cards is my super power. I dont just sign my name, I write.

And then God laughed. I wrote Tuesday. I came home from work Wednesday and crashed (essential employee). I wrote Thursday. Ended up on the phoen a lot Friday, still wrote thouh. I wrote on my breaks. I wrote on my lunch. I wrote on Saturday and on Sunday morning. And at some point, your brain goes to sleep and magic happens and you’re just creating.

I delivered 82 cards on Sunday. All the cards opened with “To My Special Friend” and ended with the note that they are special and they are loved. I signed only with my first name. No phone number, no return address. Because while it would be great to know if the right card got to the right person… I am fighting my need for positive reinforcement.

I did it because I am an #Armyofone, and #becausewecan.

And also because Jen Pastiloff asked “How May I Serve?” 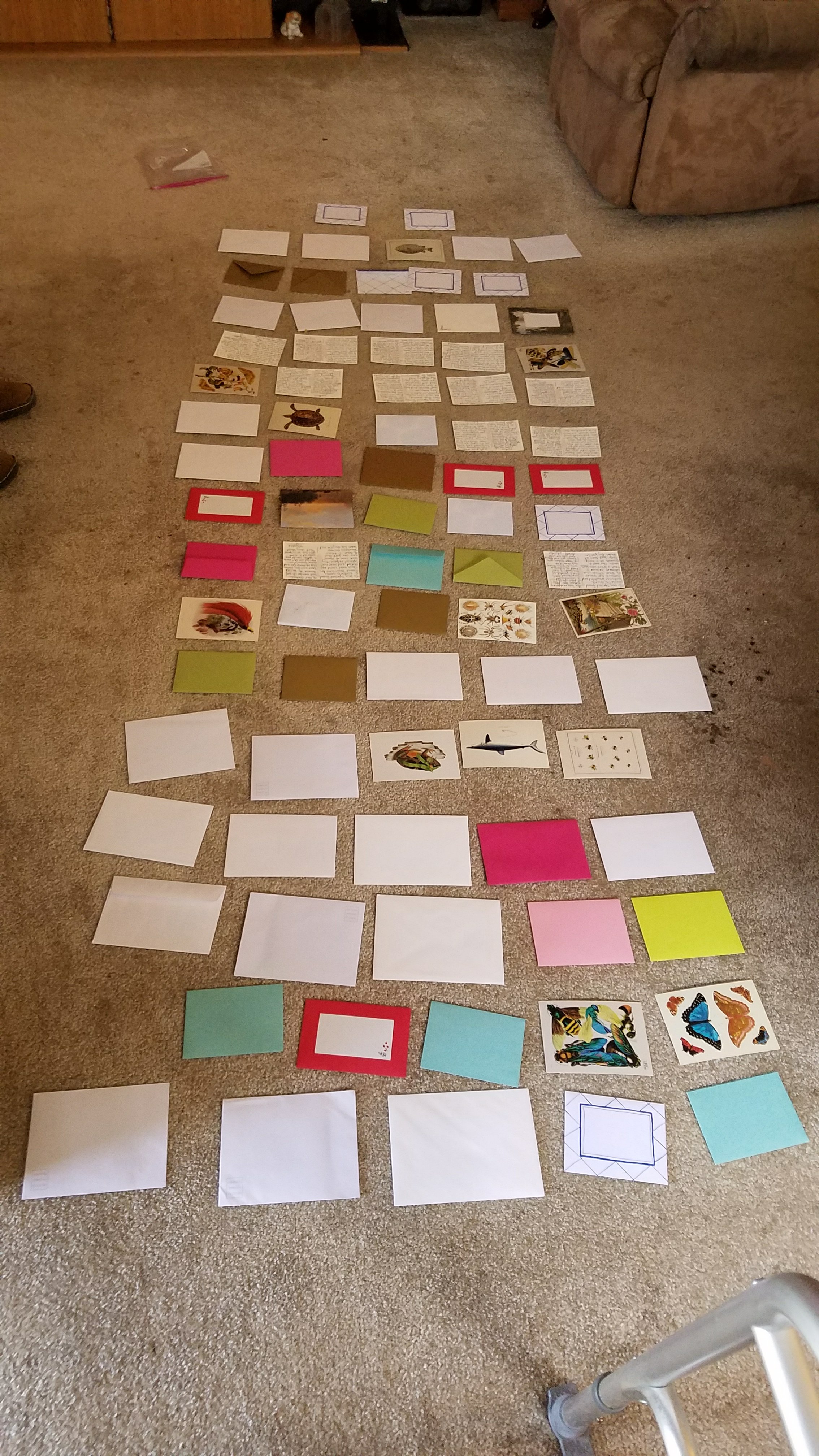 Well, I haven’t been reading as much lately because I’m living in my brain, working out the important people in my new story and who goes where. I’ve done novels both as a seat of the pants thing, and as a strict outline and I gotta tell you… Neither work for me.

My outline is loose– I like to be able to take detours. But the outline itself helps to remind me where I’m trying to go. Getting from one place to another becomes easier when you know the surrounding neighborhoods because then you can find interesting paths.

I’m also listening to Bon Jovi’s new album, “Because We Can”. Specifically, track 5. I don’t know the name of that song, but it should be Amen (which if you’ve heard the disc you’ll agree with my titling of it). It just fits… because the story is becoming more about 2 broken people figuring out how to be whole than just the one.  So that’s what I’ve been up to recently.

If you want to check out a scene I wrote back in the day, go check out my friend Rie’s post at Mocha Memoirs Presses blog:   http://mochamemoirspress.blogspot.com/2013/04/putting-sizzle-in-steamy-scenes-part-one.html

Music has always been a big part of my writing. I used to make a play list of songs for a novel that I’m working on. The songs range in genre: rock, pop, classical, jazz— the story itself decides the tempo.

Rie’s post is about writing sex scenes as a writer, so hang on to your blushes! But it’s a good article. There’s actually a lot of great posts by MMP’s writer’s going there. I believe I mentioned that I write on the blog on the tenth of every month. But there are several of us who picked a day to post, so feel free to poke around.

Till next time, my lovelies!